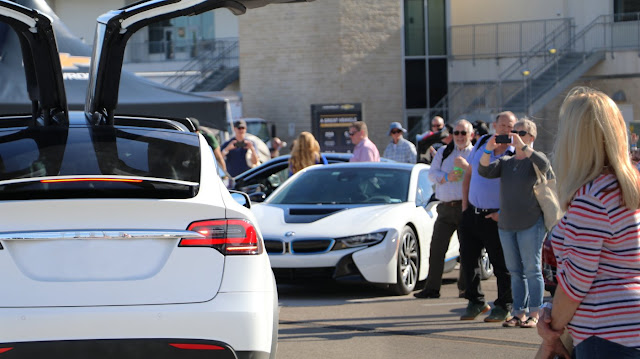 Tesla has had a twelve month run that, if one can assume that a conservatively managed fund will average 6% YoY, equates to 190 years worth of gains. For much of this time, Evergreen Financial Research has pushed the case that shares of Tesla were extremely undervalued, and that the company was gripped by the lapels and held underwater by most mainstream financial news outlets. For the first time ever, Evergreen Financial Research believes that Tesla has, from a valuation standpoint, grown into its well-deserved shell. Tesla remains an interestingly valued firm; while Tesla seems to be overvalued by a fundamental perspective (EPS 1094), there is hardly a shred of a guarantee that the market will not continue to value Tesla based on the assumption that the firm succeeds in pioneering the transition to renewable energy, and eats every ICE automobile in the process.

Tesla shattered many bears' expectations in Q2 of this year by posting a profit, and those who follow the stock know that TTM profitability was the only remaining requirement for Tesla's addition to the S&P 500. While Tesla's stock floundered somewhat immediately following the earnings report, Tesla shares have soared again in the past two weeks, likely due to many larger institutions buying in bulk, the anticipation of S&P 500 addition, and the announcement of a 1:5 forward split, which is often interpreted as an outward and confidant signal that a company is financially healthy.

EFR firmly believes that Tesla will continue to gain automotive market share in the coming months and years, and is a solid stock pick for long-term portfolios. We firmly believe that Tesla will be a key player in helping the world transition to renewable energy, and that as Tesla gains clout and notoriety, worldwide governments will be more disposed to assist Tesla with its interests. We also believe that Tesla has established a pattern of innovation, consumer-faced product management, and attracting the world's top talent.

All this being said, $500 billion is an astronomical valuation for any company. $500 billion is what Apple was worth in 1Q2017. Recently, Tesla seems to have become one of the stock market's wonderbabies, a stock that gets additional valuation based on public sentiment.

From EFR's Twitter AI, nicknamed Tweetpop, we are seeing a nearly 8,300% uptrend in tweets that have Tesla's cashtag, $TSLA. In that time period, the overall tweet sentiment regarding Tesla has also shifted to be much more positive. In addition, tweets with the cashtag $TSLAq are down 1,244%.

As per Sir John Maynard Keynes, "The economy can stay irrational longer than you can stay solvent."

We do not believe Tesla is a sell, much less a short. In terms of the company's stock, we rate it as follows:

3: Hold for the short-term,

5: Hard Buy for the long-term.

While we believe shares of Tesla to be somewhat overvalued, the company was also up nearly 15% (including after-hours trading), without any salient news releases. This is especially incredible considering that the firm's addition to the S&P 500 is yet to be announced, which addition could easily drive the stock price up another 10-15%, purely due to the required purchasing on the part of large financial institutions that hold the S&P 500.

We warn investors that while the potential upside in the next few weeks remains large, albeit irrational, Tesla has a history of extreme volatility; as EFR's historic pricing AI, nicknamed Overlord indicates, Tesla is more prone to large (7-11%) intraday gains/drops than any other large-cap company currently in the S&P 500, and could just as easily gain another 20% as it could shed another 20% in the short-term.

Evergreen Capital, sister to Evergreen Financial Research, plans an unorthodox trading strategy for trading Tesla options contracts in the next few weeks. Evergreen capital plans to consistently open strangle contracts, in which the call and put contracts' strike prices are $10 apart, the call being $5 above the current stock price, and the put being $5 below. At any point that the contract's value has gone up by 15%, the position will be closed and a new strangle will be created, centered around the stock's price at the time of closing the last one.

In doing so, Evergreen Capital can continue to profit off Tesla's volatility and tendency to make larger movements at a time than any other firm of a similar valuation. This protects the fund in the event of a sudden crash, while allowing it to continue to gain from the rises, should they continue. At some point, the fun has to end, but there is no telling how much fun will be had before it stops.

Legal Disclaimer --This article is for informational purposes only. You should not construe any such information or other material as an investment, financial, or other advice. Nothing contained in this article constitutes a solicitation, recommendation, endorsement, or offer by Christopher Larson, Evergreen Financial Research, Evergreen Capital, or any third party service provider to buy or sell any securities or other financial instruments in this or in any other jurisdiction in which such solicitation or offer would be unlawful under the securities laws of such jurisdiction.Christopher Larson is head of investments for Evergreen Capital. Both Larson and Evergreen Capital hold shares and own securities at the time of this article's publishing in Tesla, Inc. and/or its affiliates.

January 18, 2021
Bitcoin's recent run has ushered in yet another wave of loud-mouthed permabulls. Generally, the emergence of these fair-weather fans is directly correlated with the price of Bitcoin. Since Bitcoin's recent run-up, however, many altcoins haven't performed to par as they did in late 2017, when they skyrocketed alongside Bitcoin's run to its previous all-time high. Bitcoin, in the past two weeks, has pulled back somewhat from new all-time highs, which begs two questions: Will altcoins follow suit, and if so, which one/ones? Bitcoin and altcoins are in unchartered territory, from an investment standpoint. They are not commodities, because they don't exist physically. They cannot be considered property for the same reason. The argument of them being a realistic currency is hard to make, as currencies shouldn't make 3-7% jumps overnight. It is also not a stock, security, or equity, since its ownership comes with no privileges.  So, from an investment perspective: wh
Post a Comment
Read more