Shares of Advanced Micro Devices (NASDAQ: $AMD) have torn through the $70's as if it were a blink, shooting up following the most recent earnings report. As of Thursday's market close, shares of $AMD traded at $86.71/share. Given 1170000000 shares outstanding, this gives AMD a market cap of $101.45 billion.
AMD's earnings showed a continuation of healthy reports and good news. Revenue increased 8% QoQ and 26% from 2Q2019, while operating expenses increased by 6.2% QoQ and 20.1% YoY. Gross margins gained 3pp YoY but lost 2pp QoQ, and for the past quarter were 44%.
We believe AMD to be very uniquely positioned. AMD has risen in market share over Intel for seven consecutive quarters. The last time that CPU market share was this close between two manufacturers was in 2005. While Intel Corporation's CPUs tend to perform better on a per-core/per-thread basis, AMD's strategy of raising the number of cores and threads (without neglecting per-thread performance) is key to taking market share in a world of computing that is increasingly dynamic, and requiring increasing multitasking capacity. 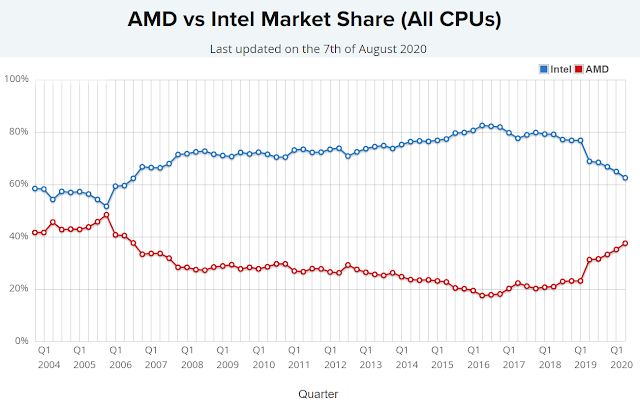 AMD is also becoming a more formidable competitor in the discrete graphics market. Although at the moment, AMD does not have a GPU that can beat Nvidia Corporation's in overall benchmarks, we have seen a trend in recent years of AMD creating more powerful products at appealing price points. AMD's 5700XT graphics card tests less than 4% beneath the Nvidia RTX 2080, but does so for about two-thirds the cost. This Q4, both AMD and Nvidia are expected to release the stats and specs for their next generation of GPUs -- Big Navi and Ampere are the respective codenames. AMD's Big Navi is expected to be released on a 7nm lithography, while Nvidia's newest generation is expected to use a 8nm process. While this is not a significant difference in and of itself, we have seen AMD consistently pushing the trend in innovation, lithography, and architecture. For comparison, Intel's upcoming Tiger Lake series of CPUs will use a 10nm process.
While the market share earned by the next generation of GPUs will depend greatly on the upcoming product releases, we believe AMD to be at least a year ahead of Intel in the CPU market. Considering that AMD has a market cap of <$100 billion, and Intel is just above $200 billion, AMD still sits poised to grow significantly, even in light of the company's recent run from $30 to $90 per share in the last twelve months.
Evergreen Financial Research maintains Advanced Micro Devices' rating at 5/5, or a "Hard Buy" rating, and offers a price target of $130/share.